An inspiring scent which is uplifting and warm, perfect for a cozy ambience.

Editor’s Notes:  An inspiring scent which is uplifting and warm, perfect for a cozy ambience.

A little history… A fragrance of freshly cut cedar-wood blended with fresh herbs, Phoenicia evokes the lovely aromas found in the forest of Becharreh, in Lebanon, home to the oldest cedar trees in the world. The Phoenicians believed the wood of the glorious cedars to be the sacred wood of the gods and used it to honour their ancestors, a task to which the ancient orient attached deep importance. The cedar tree was also thought to be an emblem of prosperity.

Product Information:  Ancienne Ambiance luxury scented candles come perfectly presented in hand-crafted luxurious gift boxes made in the United Kingdom. Thoroughly delicious and full of fragrance (which lasts the whole way through), each candle is hand-poured in the UK using traditional techniques, special slow burning wax blend and lead-free wick. At the base of each candle you’ll find a fragrance heritage story detailing its ancient roots, along with candle burning tips.

Production:  Made in the UK

Mosaic Homage:  Ancienne Ambiance Candle labels pay homage to the beautiful artistry of ancient Roman mosaics, taking inspiration from ancient motifs found in some of the most well known mosaics of the Roman Empire.

“It is just as described – warm and uplifting….The first thing about this candle to stand out is the scent before the candle is lit, the beautiful woodiness of the cedar notes which gives it a spicy warmness which just fills every room of the house and rather than being the more masculine scent I was expecting, instead what you get is quite the opposite” – BeautyQueenUK

Follow our Candle Tips & find out about Recycling Your Candle Glasses >>>

We’re extremely proud of the artistry behind Ancienne Ambiance Candles and the candle values we work by to ensure we produce the highest quality and safest candles.

Find out more about the craftsmanship of our candles here 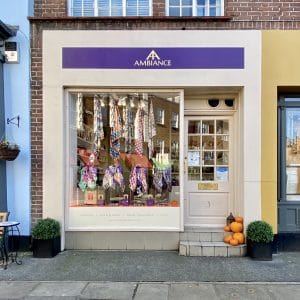 We maintain strict practices so you can shop safely at our Chelsea boutique.